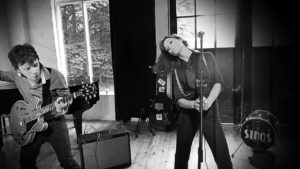 London UK based trio Sid Sings bring a different take on dirty blues riffing rock; they define their sound as ‘blues infused rock and roll’ and simply put, they are right. They shun bass guitar which gives an instant Crampsy filthiness to their sound while the superb vocals of Nikki Ashton add the bombastic air of Mansize era PJ Harvey to the proceedings, aided by Sandy Michie’s guitar and Nic Marangoni’s drums. If you google Sid Sings, the internet will happily tell you all about the posthumous Sid Vicious solo LP, however I implore you to add the word ‘band’ to the search instruction and you will be greatly rewarded with far superior results for your efforts.’

Notes from the Underground is Sid Sings’ album; the opener “Killer Love” builds menacingly slowly with drums arriving half way through the verse oozing a touch of Howlin’ Wolf’s “Wang Dang Doodle” before veering off into the catchy groove of a T-Rexian chorus.

The lost spirit of a female John Lee Hooker pervades the whole album and “Sometimes I Want You Dead” is a full frontal in your face, hip swaying threat – and very much all the better for being so. 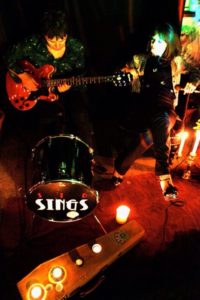 “Hold Onto My Shoes” looks back to the muddy dawn of electric blues and dives into the swirling dirty waters, “hold onto my shoes and I’ll go now” while “Ooh Baby You” sets off with a low scuttling rhythm and twangs away with a hint of The Creatures too when the guitar drops out after the first chorus, it’s a big sound for just three people.

With a guitar line that tips it’s hat to Bob Dylan’s “Rainy Day Women 12&35”, “Nobody Knows” bursts into a glorious slide guitar workout, followed by the smoother acoustic picked guitar introduction of Home – with discrete hints of Edie Brickell’s New Bohemians Shooting Rubber Bands At The Stars’ album – floating with a desire to hold tight with Sandy Michie’s slide again proving subtlety is in the arsenal along with the already disclosed nuclear weapons.

Menacing slide guitar heralds a stomping “Wilkoish/Dr Feelgood” maniacal descent into oblivion in “Rest Will Do You Good”, the advice is to take that holiday before it’s too late and is quickly followed by Death Rattle Boogie which is definitely the tune to play to anyone that has just asked for a definition of dirty blues rock and roll.

Giddy has a more spacious almost Madchester-ish intro riff which opens up into a slow slide’n’roll howl, then an unexpected accordion in the following “Cold Here” breathes it’s wheezy chords mixing into the vocals.

“Full Moon Rising” picks up the pace again and chops like a woodcutter on amphetamine while the drums alternate thumping and tapping and whole kit with abandon. Listening to the frantic “Strange Days” there is no doubt that this is rock’n’roll, ‘wherever I’ve been I never want to go again’ – unless of course that place is this album, the twelve tracks of which need to be revisited repeatedly. This is an irrepressible riff drenched slice of electric Thames delta blues’n’roll. And there is more on the way, with another single lined up awaiting a release date.