Dustin Thomas is a traveller, a singer-songwriter, an advocate for environmental and social justice and all round nice guy. Hailing from Hawaii, he has just finished touring the East Coast of Australia, performing a series of one-man shows. I was lucky enough to catch him in Melbourne at The Toff in Town, toward the end of his tour.

One of the first people I saw when I walked into the band room was Dustin Thomas, surrounded by a small group of fans. I quickly learned that he likes to meet people, connect with his audience and have a chat. His performance was simple, two microphones, one guitar and one voice. 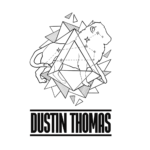 He presented songs from his new CD, ‘Year In Review’, which deals with topics such as love, peace, freedom, the impact of drilling for oil on Indian land and other political topics. In between songs, he introduced his messages, including his take on the Bush Government as “a subtle mechanism for dismantling everything”.

About half way through his performance, Dustin’s mike stopped working, so the quick-thinking musician perched himself on the edge of the stage & encouraged everyone to sit on the floor. He then played a couple of un-plugged acoustic numbers, with the audience at his feet, almost like sitting round a camp fire sing-along. This generated a wonderful bond between artist and audience, as the crowd really felt part of the show. Power was quickly restored and his show progressed as planned.

Dustin is a real storyteller. Some of his songs are more like narratives than the usual repetitive song lyrics, but he manages to use music, rhythm and beat to bind it all together. He includes some beatbox, using the second microphone, to add a rap element and contrast to his acoustic R&B vibe. So passionate was Dustin’s performance, at times he reminded me of the late, great Bob Marley. His facial expressions really emphasized his passion.

The crowd at The Toff were all absolute fans, singing along with chorus lines and interacting with him in between songs. I’m sure Dustin Thomas made many new friends this night. Thanks Dustin for a wonderful evening.

Although his Australian tour is now complete, he is heading to North America in May, June and August, so catch him if you can. I also know he will be returning to Australia next year, around Easter. So stay tuned for an official tour announcement.