I had to choose between two concerts tonight in Paris : the legendary Tony Joe White at the New Morning or Sting at the Bataclan! The Bataclan re-opened tonight, after many renovations following the terrible attack of November 13, 2015. Peter Doherty was announced a long time ago as the first artist to perform, but Bataclan management preferred to accept Sting’s proposal. One can, of course, criticize or agree with this choice but Sting is a more unifying artist, with a more appropriate repertoire, more consensual than Peter Doherty’s for such a ceremony!

The Bataclan promoters decided to reserve 800 tickets, out of the 1500 that the venue can contain, to the families of the victims who perished in the place during the concert of Eagles Of Death Metal, so it made sense to leave it to Parisian colleagues.

And we went to the New Morning, in the 10th arrondissement, to listen to an old legend of “Swamp Rock”, Mister Tony Joe White. A concert which happened under a simplified formula–namely his voice, his guitar, his pedal effects and drums!

Also accompanied by his guitar only, Jeremy Cardot, had been chosen by the Production to open this show. For his first performance in Paris, Jeremy was not intimidated and conquered an audience, which had come for another voice and another musical genre.

I especially enjoyed all his dexterity and emotion put in “BB leaves”, a theme he composed for BB King, the day he heard of his death!

Jeremy Cardot, a name to follow among young French talents!

At 73, Tony Joe White made a little European Tour to promote his 19th studio album “Rain Crow” produced by his son Jody White. 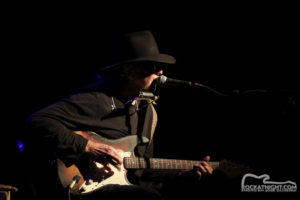 Every time the Swamp Man comes to Paris, his concerts are sold out. These two dates did confirm the rule. When he entered the stage with his Stratocaster and his harmonica, he looked like Neil Young, with the face hidden by his hat. The Louisiana- born Tony Joe White is still going strong, an American musical treasure. He became famous mainly with “Polk Salad Annie” in 1969 and through artists such as Elvis Presley with his songs (“For Ol’ Times Sake”; “I’ve Got a Thing About You Baby”).  As you hear Tony Joe White, he is one of the singers that has his own sound. Chatting with the audience, he could explain the meaning of some of his new songs. In “Tell Me a Swamp Story” we could listen about conjuring women who live alone in the swamp. Many of his lyrics are linked to his childhood near northwest Louisiana, just south of the Arkansas line.

I’ve always been a Tony Joe fan since “Poke Salad Annie”. Unfortunately, I think his latest work is far from his best. But the age does not forgive and it feels the effects in its rather melancholic set. In spite of his age he always possesses a well checked guitar technical control. The rhythmic complicity between his drummer Brian Owings and himself is the basis of their Mississippi sound. But a TJW concert can not be completed without a tribute to the guitar and for me the best moment was the old song “ The Guitar Don’t Lie”!

He splattered the show of his talent with precise solos, limpid, shy sometimes but with incredible finesse and very well mastered.

He provided a thundering show with several tracks from the last album and also a large “best of” of his music production.

“In a Paris Mood Tonight

There was no beginning

Our Love is timeless

Stronger Than the reason why