Rock At Night spoke with glam rock legend of Mott the Hoople fame Ian Hunter while he was home in Connecticut, on break from tour with his band Ian Hunter and the Rants. He is promoting his 21st album Fingers Crossed which not only has great rock songs and ballads, but is rich in lyrical content.

In case the name Ian Hunter doesn’t ring a bell, I’m sure you have heard the song “All the Young Dudes”, which was a huge hit for Mott the Hoople. Written by David Bowie, the song put the band on the map in the early 1970s. The song “Once Bitten, Twice Shy”, which was a big hit in the 1980s for Great White, was written by Hunter, as well as “Ships” which was recorded by Barry Manilow. “Cleveland Rocks”? Yes, another huge hit written by Hunter.

Check out Rock At Night’s interview below:

Rock At Night: I am really excited to speak with you because the album The Hoople meant a lot to me growing up (just as a sideline). It meant a lot to me as a teenager. When I heard you were on tour and I was going to interview you, I was thrilled. I have listened to your new album Fingers Crossed and I’d like to talk about it with you.

Let’s talk about songwriting. How has it changed through the years for you? I notice a lot of your songs have cultural and historical references. You use the theme of Greek mythology in one of your songs.

Ian Hunter: Writing is kind of magic. You wake up with something in your mind. You get on stage and you get it quick—the thought–and if you have any talent at all it’s how you expand upon that thought. What you originally get is maybe a hook, or maybe a lyrical line, a title or maybe something musical. You’ve got to get out of bed at 4 a.m. and get it down. If you don’t, no matter how good you think it is or how strong you think it is, you’ll forget it [if you don’t get out of bed]. So you’ve got to get up in the middle of the night and do all that.

Rock At Night: Do you keep a Postette pad next to your bed?

Ian Hunter: That’s no good. You’ve got to get the feel of it—the groove of it.

Rock At Night: Ahh…so you actually get up and grab a guitar or go to the piano?

Ian Hunter: I did an album once and it was called All the Good Ones Are Taken. I had a song once but I really didn’t get the groove. I didn’t put it down and I couldn’t get the groove back. It was maybe 20 or 30 years later that I actually found the original groove.

Rock At Night: A couple of the songs deal with historical references like “Fingers Crossed” (forced Navy recruitment in the 1750s) and “Bow Street Runners” (the how the bobbies got started). Do you read a lot of history books?

Ian Hunter: It was actually backwards with the “Bow Street Runners”.   The title just came into my head and I liked it….I’ve got a title and now I have to write a song about it. So that’s when you Google and start checking things out.

With “Fingers Crossed” I originally woke up [thinking] that I was pressed into service. I didn’t know what that means so I took it from there.

Rock At Night: I had wondered if you watched The History Channel or something.

Ian Hunter: Oh, yeah, yeah…I read a lot too. You have to touch on subjects that you haven’t touched upon before. That’s what keeps it interesting.

Rock At Night: That’s what I like about your music. You do tell stories but with a rock beat. It’s almost subliminal…like the person is learning history while toe-tapping at the same time.

Ian Hunter: I think they’d ought to do that more often! Chuckle

Rock At Night: Now the song “White House” has a country rock feel. It made me think of the Traveling Wilburys.

Ian Hunter: I love the band and they are one of my favorite groups of all time. I love that kind of music.

Ian Hunter: Yeah the people don’t like me doing that so I have to sneak a couple in there here and there.

Rock At Night: I like it because it’s going back to roots rock. That’s what real rock is!

Ian Hunter: I’m a huge fan of Levon Helm and this is his approach. I love that vintage American music. It’s brilliant!

Rock At Night: The song “White House” gives me a visual of the country and “dogs with fleas”. You mention something in the website about a beaver. Did I miss that in the lyrics?

Rock At Night: Oh, Wally! OK…Wally is the beaver.

Ian Hunter: I think Wally is one of two kids.

Rock At Night: So this is a real animal?

Ian Hunter: Yes, he was most upset when we moved in. I think he thought he was taking over. There is a pond and a dam. He ran over my feet a couple of times. It was like ‘you don ‘t belong here…this is my place.’”

Rock At Night: So this is for real? You are living in the white house.

Ian Hunter: He’s moved downstream. He’s further down now. The house was empty for six months before we moved in. He was most upset. He took over.

Rock At Night: The song I really liked, of course, is “Dandy”. I’m sure that is the one most people talk about. Man, I looked at the lyrics and I almost describe it as a painting. Each word is like a dab of paint on canvas. Starting with “Mr. Jones”….a lot of people probably don’t know that was Bowie’s real name. David Jones.

Ian Hunter: It really clicked in a couple of days. I was writing a song called “Lady” and I was having a problem with it. When it happened to David, “Lady” became “Dandy”. It was written from that period….the pre-Ziggy period…1971. It was written from that perspective and once you get the idea, it was easy. It was like a couple of days and that was it.

Rock At Night: The sound of the song has almost that nostalgic “Young Dudes” feeling to it.

Ian Hunter: I know it was strong…in your face. You either “get it” or you don’t. It’s either you like it or you don’t.

Back in those days it was pretty black and white in England. It was kind of miserable. David came after Flower Power and the Blues. Everything had been kind of dull or kind of silly. When David came in it was like cinemascope. It was Technicolor in a drab kind of situation. It was the beginning of the old glam, flash, or whatever you want to call it. Back then people real gave you a show as opposed to a person just standing there and doing nothing.

Rock At Night: It was very theatrical.

Ian Hunter: Yeah, I remember seeing him as a young girl….with the shaved eyebrows and the make-up and the outfits. It was shocking in those days! Nobody had ever done anything like that.

Rock At Night: I notice a lot of political references in your songs “I am President”, “Marionette”, “Morons”….

Ian Hunter: Well, what is happening now is totally outrageous. I blame it on poor education and reality shows, I think.

Rock At Night: I really like the song “Long Time”. It has the honky tonk piano in it.

Ian Hunter: The piano player in that is John Mayer.

Rock At Night: Who is in the Rant band right now?

Ian Hunter: Dennis Debrizzi is on keyboards.   Steve Holly is the drummer. He was with Wings and Cocker. James Mastro. He was a member of a New York band called The Bongos. Mark Bosch is the lead guitar player. Paul Page is the bass player.

Rock At Night: Let’s talk about the song “Ghosts”. I guess you were inspired from being in Sun Studio. A guy rang me up to have a private tour of the studios. His father was one of the Jordanaires that played with Elvis.  I had been there before but this time….the room was alive…I don’t know if you have been to Disneyland the ballroom…the Haunted Mansion….it felt like that….all these spirits.

Check out photos from Ian and the Rant Band’s recent gig at Cat’s Cradle, Carrboro, North Carolina below:

Ian Hunter and the Rant Band will be visiting the UK and Scandanavia in November 2016: 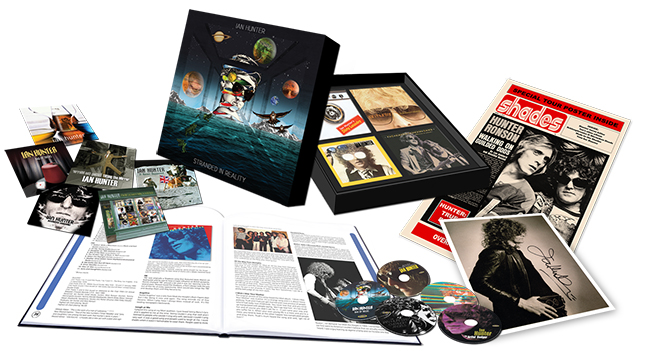 The limited edition boxset is available now on www.propermusic.com.