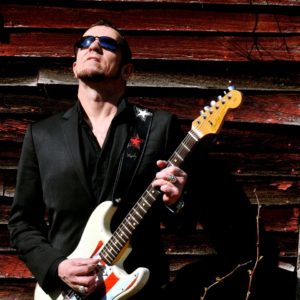 Gary Hoey is often known as a shredder who takes on many classics, reinventing them in all their metal glory; however, Hoey began exploring the blues in recent years with the introduction of Deja Blues in 2013 and now, Dust & Bones, which will be released July 29, 2016. In this album, it feels like Hoey is very much at home in this 11-song CD, which pays homage to many of his musical heroes. Composed in the vein of each, the CD consists of a very cohesive mix of tunes, ranging between rockabilly to Delta blues and blue-rock. Hoey sings vocals on 10 of the tracks with just enough grit and attitude to make the CD sound truly authentic and not an imitation. The last song “Soul Surfer” is a jazzy surf rock instrumental, which he pays homage to the King of Surf Rockers, Dick Dale.

Actually, during a recent interview, Hoey noted his interest in blues or “music of the people” transcends to at least the mid-80s. He attributes Stevie Ray Vaughan’s solo at the end of David Bowie’s song “Let’s Dance” as introducing him to the notion that pop, rock, and blues are complimentary. For creating Dust & Bones, Hoey used a resonator guitar by Republic Guitars, Austin, Texas, and added some feedback and distortion. In the song “Boxcar Blues”, he pays homage to both Robert Johnson and Led Zeppelin—and uses a Dobro and slide guitar with Open-D tuning (think Duane Allman) turned down a half-step (D-flat) to get that down-home swampy sound.

“Another Time, Another Place” offers an emotional clean guitar lead sound while “Born to Love You” and “Ghost of Yesterday” are hard-driving 80s ZZ-Top-ish, rock featuring mean wah-wah accompaniment. 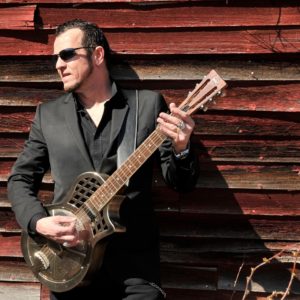 One of my personal favorites is “Who’s Your Daddy” which features a clean but slightly fat guitar tone in full rockabilly glory that “makes me want to jitterbug.” This would be a great single!

“Coming Home” is a wonderful duet with the fabulous Lita Ford, which offers a singalong chorus and a touching message that everyone can relate to—truly a love song and a stand-out in the mix.

“This Time Tomorrow”, Hoey’s tribute to Robin Trower, features a dark, moody and sexy reverb guitar melody throughout. This is the kind of moody, blues song one could easily slow dance to in a dark, smoky bar.

“Back Up Against the Wall” has almost a 50s or 60s retro feel with organ accompaniment and a fat distortion guitar melody. Lots of fun that will appeal to Stevie Ray Vaughan fans!

“Blind Faith” is another authentic, down-home dirty blues song which features slide guitar and a great foot-stompin’ groove. This song is another one of my favorites on the list.

“Soul Surfer” is “Dick Dale meets B.B. King”. There’s elements of jazzy, reverb-filled guitar chords but then a “Thrill Is Gone” feel to the song.

Overall, Dust & Bones is a great blend of rock, blues, and rockabilly that is not only fun to listen to but also quite danceable. You might find yourself cutting a rug after you put it on the stereo.