By John Clay, Rock At Night Columnist-LondonJohn Clay a.k.a Clark Kent records bands live in session with the cinematic flair of an auteur. Often, the bands are encouraged to play previously unheard material. They occasionally say ‘yes’.

John Clay Says: This playlist of videos is a collection of this years’ live sessions. Affectionately titled ‘Two Steps forward’, this array of videos charts the progression of my balancing act between arresting visuals whilst maintaining a reasonable sound.  Two steps forward and perhaps the odd step back.  And hey, there’s even an introduction -an explanation if you will – as to why I started filming musicians in the context of a secure space.

A Special Collection of Videos!

Kick back and watch the collection of videos! 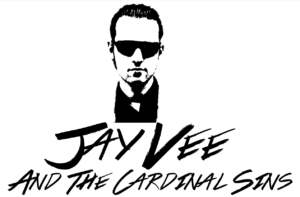 The last band to feature in the compendium is a garage rock band called Jay Vee and the Cardinal Sins. Since this was the last video in the first season of the live sessions, it made complete sense to go out with a bang.  And so, Jay Vee and The Cardinal Sins were co-opted into the show for their punchy garage rock complete with sunglasses in doors, a stage prop that only works if the band is any good.  Thankfully, they were.

Jay Vee (vox guitar) has the archetypal look and sound of someone whose studied his genre well.  His guitar technique is pretty impressive, and it should be, given that he has a long background in playing Jazz piano. Vince (bass guitar) is his more cool and collected foil and if you are wondering why there is a flashlight on his guitar, check out the beginning of the video as to where the light is pointing …

… Cos as everyone who watches these vids knows, I LOVE filming drummers.  So I just had to make sure that Tom (drums) was lit correctly and was the feature of the ‘meta-cam’ lying on the floor.

I’ve only ever seen this band live once, and despite the great atmosphere and a great crowd, the venue didn’t deliver on the sound.  That is no reflection on the soundman, it’s more a case of the PA being far away from the stage, making my style impossible to pull off. I’d zoom in on Jay Vee and lose his vox.  Very frustrating, because this band has all the inherent cinematic flair I look for when I decide to shoot these videos.

Recording these guys at Survival Studios meant I had to beware of the performance mirror behind me, to avoid my appearance in the frame. I think my shadow popping up now and again has arguably become a convention/tick of my style, but to have my whole body – well … it would have to be something that works on a case by case basis.

Jay Vee and the Cardinal Sins

Season 2 will be released in October as a 13 part playlist featuring Piano Wire, Muertos, White Ape, Frauds, Japanese Fighting Fish, Sex Cells and other bands which for now I’ll keep a tight lip about.

EDITORS NOTE: Jay Vee and the Cardinal Sins have a revolving cast so to speak, so if you choose to use other photos of the band from their Facebook, please be sure that they are the current line up. I think the ones I’ve chosen are the best however 🙂