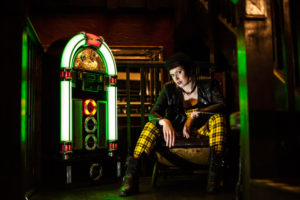 The Thirsty Scholar is an unassuming and easily missed doorway in a brick railway arch under Manchester Oxford Road railway station, leading into a bar with a subterranean feel. As well as being home to a spectacularly good day-time vegan kitchen it’s a regular live music venue and Monday was London based (via Norfolk) Millie Manders and her band on the third night of their current nine date UK tour. The five piece ska-punk combo were all happily mingling and chatting with the audience before their set as a high quality open mic night began the proceedings. I’ve seen Millie twice before, once as a duo (accompanied by her own ukulele playing and a guitarist) and once with a four piece, drums, bass, guitar & uke format, since then Millie has added saxophone to her own skills and the addition of a second sax player has made them into a five piece for this tour. The opener “Obsession Transgression” is the first song on her successfully crowdfunded EP and barges in immediately with the power of doubled up sax stabs. A hugely full sound for only five people. Her tunes are spiky and oozing attitude with a ska lilt never far away, but transformed and evolved beyond that, taking in scat jazz and punk aggression.

Millie unhooked her own sax in favour of the uke for the irrepressibly catchy earworm “Hole In Your Chest” and then with a brief “If you want to play a drinking game take a sip every time I say ‘Drink’ in this one” Millie’s homage to Bacchus the deity of wine (and also from the crowdfunded EP), lifted off and became – appropriately – increasingly depraved throughout. 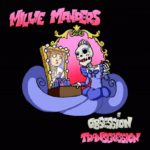 The uke driven “Little Big Mouth” – a previous single – and then a two paced cover of Republica’s “Drop Dead Gorgeous” and straight into the ‘psycho girlfriend’ EP song “Teddy”, beginning with a rumbling scuttling bass run and a spoken vocal line, it quickly gets more and more deranged until it’s channelling Siouxsie Sioux inspired shrieks. The wonderful and even more manic “Sick” followed, then “Mr. Stupid”, and the singalong audience participation of “Thoroughbred Potato Head”. The set ended with a cover of Van Morrison’s normally somewhat sedate perpetual wedding-playlist song “Brown Eyed Girl” but the band lift it far above ‘heard it before’ status and imbue it with an almost unnatural amount of vigour and zing making it their own, a turbo fuel injection joyous stomp of a kick skanker.

A short but genuine gap was followed by a raucous encore of the hot jazz funk flavoured EP closer Long Gone, with the words gushing out so quickly they blur into each other. Fast paced delivery and fast paced pure ska-punk, a great performer on their way up with a tight and happy band.