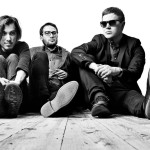 This week’s artist: The Statue Thieves

Sounds like: Where soul meets grunge with a warm psychedelic centre

The Statue Thieves: ‘I’ve been a fan of Craig Ingham for many a year now and the transition from singer songwriter to band has been not only seamless, but revealing. I can only think of a handful of artists who can muster power using chilled vocals and loud guitars. Nigel Thomas comes to mind. Check out their interview and THAT stellar live performance in the vids below. Yeah!’ – Clark Kent a.k.a John Clay.
The band members are Craig Ingham (vocals, guitar, harmonica), Ivan Muela (guitar, vocals) Gennaro Oliviero (drums) Michal Domin ( bass guitar )

Link to the Double A Side:  The Statue Thieves

Check out their SoundCloud site

I'm a promoter of underground bands based in London and sometimes, further afield. I direct and shoot music videos for a living.
Follow Me
Latest posts by John Clay (see all)