Rock At Night (RAN) had the pleasure of interviewing Brother Love (BL) and Alex Haddad (AH). Please check out the interview below:

RAN – You’re the second Nashville band to come here in a few months.   I think there’s an attraction for American Southern Rock to this area! Ensisheim may be the sister city of Nashville (laughs). Tell us something about the beginning of the band!

AH– We started in 2013. Brother Love and I, we were always writing together and what we wanna’ do was to make music that reflected our taste, our influences, which whatever be, was always around rock ‘n’ roll. We felt that there was a real void in rock music and we didn’t have that same kind of groove to be our brand—like the things that you got from bands like T-REX, FACES, all that. When we wrote together, we just wrote material that we enjoyed making and never believed it would turn out to be our brand of rock n’ roll. So, that’s how we started entertaining ourselves, playing the music we love.

RAN- It’s quite surprising to see an American band influenced by THE FACES, by one of the most prestigious British born bands!

AH– If you have good taste, it’s normal, man!

RAN– Press reviews focus on your power and energy on stage, being so near to THE BLACK CROWES or THE ROLLING STONES. It’s great!

BROTHER LOVE- That’s cool! I mean, we never say that! It’s the most beautiful thing we hear. People say it but, you know, we just follow our hearts and that’s what we listened to growing up. The energy from the crowd, playing and performing live, makes you feel excited because you play something you love to play, you know. (It’s) songs that you wrote together, that you got to play in a band with people that you love. The audience just feels that energy. Everybody leaves their problems at home and come to have a good time!

AH-And It’s a bit like a caged animal! (laughs) We unlock the cage and we go around on stage!!(laughs)

RAN- What inspired your music proceeding?

BL– Honestly, we been living together in Nashville for years. We all play in the band together, we tour together, we are best friends. It’s sort of like, he has an idea, I have an idea, and we share some feelings. Sometimes, I’m up in the shower and Alex is playing guitar, something really cool, and suddenly a riff can put the fire on the piece, you know! Shit! And I go and run downstairs to get on the drums and say to Alex ‘Just keep playing.’ Sometimes it is so awesome, so cool. And the magic results! So, we come slowly into a song. It’s so cool.

RAN– And what about lyrics?

BL- We work on the lyrics together. Whatever comes first… Alex is the Poet of the Band—the lyricist.

AH – We both share every aspect of the writing. I mean, the inspiration just comes from our experiences in life—the ups and downs and everything in between, well. It’s catharsis! It’s what the music is! Just let it all out! It comes from a place that we can’t really put a finger on but it’s somewhere intangible and when we hit it, it feels so right, you know.

RAN– How does it feel working and living in the country’s Kingdom of Nashville?

AH– You know, it’s funny! Nashville is deceiving because, maybe like ten years ago, it was still a country town–but its Music City for a reason. There’s every type of music there. You put your hair out the window and you hear the next best band to come out of America! Every day there are musicians coming down with new music, making a gimmick, the old spectrum for Rock, Soul, R&B. All these aspects in one city and it is so inspiring, you know!

BL– It’s also a great community! Because there’s a lot of bands there, in the same world of us– in the Rock World! It’s amazing because there is more and more of them and you know everybody and, as you say, in a Kingdom, Rock is very much alive and we’re all supporting of each other. We all like each other. We listen to each other’s music and have such respect. It’s a good community to have! Everybody loves what we love to do.

RAN – Great, but in the sixties and in the seventies, rock ‘n’ roll was not so well accepted in that town…

AH– That’s true! But also at that time, you had NEIL YOUNG and BOB DYLAN coming down to Nashville and, I mean, even great studios, like for example Muscle Shoals Studios–where THE STONES did three or four tracks for STICKY FINGERS–there was magic when you cross the amazing Dixie Line!

RAN– Are still there some of the old studios that made Nashville famous?

AH– Yeah! Absolutely! In fact, Kyle Lewis, our guitar player here, his father, is the owner of the 515 Studio, which is one of the best studios with state of art recording in Nashville!

RAN– Talking about your recently finished work on your follow-up EP which was released last September 2015 with seven-time Grammy award-winning producer and engineer, RICHARD DODD–who has worked with TOM PETTY and GEORGE HARRISON, KINGS OF LEON and WILCO . How did you catch this opportunity?

BL-We were working with a Manager at the time and he had worked with him before. He really didn’t care where we came from. We admired his work. We listened to all of our music together. It was like team work. He was very honest with us. Saying, ‘I don’t like this. I Love this. This is O.K. or so-so.’ But he really enjoyed what we were doing, our vibe, who we are and what the sound is. And we really liked this. The work we did, felt like home for him! It was a pretty amazing experience.

RAN– You come to Europe now, where you’ll have some big venues, especially in Spain. How did you feel about the vibes here in Europe?

AH– Wow. Well, for one, it seems like it doesn’t matter what the night is. It could be Monday. It could be Sunday and you’re gonna’ see a crowd of people out to watch a live band. There’s a real appreciation for live music. A real appreciation for a full- length record all the aspects that into the music, the art form of it! It’s treated with so much respect! And we’re always blown away!  We just been taken a back with very show we’ve played. Where we’ve played for packed rooms and people would just hang on every word. Every little thing is such a joy! In America, we take a lot of things for granted. We could be spoiled by the plethora of talent of music that’s just there on a daily. And here, I guess it’s the fact that we’re something new to Europe. It’s astonishing to us. We’ve been eating it up! We love it.

RAN– Last 5th September you opened for LYNYRD SKYNYRD in Illinois (with French accent)! A great night, I suppose!

AH+BL-( laughs!) Hey Man! This word in French sounds much better than English! (saying ILLINOIS!!) We keep it, Man!

AH-Great adventure! It was so cool, Man!

BL-They were spectacular! They were professional! Very gracious with us! We had really great feelings on stage that night! We were friends with one of the back singers, Carol. 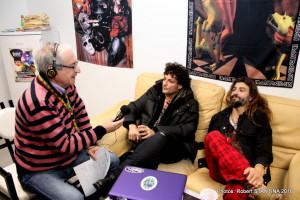 RAN– How many people were at that show?

RAN– One of your influences was also THE ALLMAN BROTHERS…

AH– Yeah! Absolutely! Look at this guy over here (Kyle LEWIS) and you’ll better understand!!! (laughs) What a better ALMANN BROTHERS look can he have?

RAN – But THE FACES, T-REX and some Bands from the British Boom are also pointed as your influences…

BL– Yeah! We have a large spectrum of Rock music influences coming from Britain. We love this period.

RAN– The beginning of 2016 is becoming so tragic with some big Rock Names passing away! LEMMY, GLENN FREY, DAVID BOWIE and today, the MOTT THE HOOPLE’s drummer!!!

What are your feelings about the death of DAVID BOWIE?

BL-Jesus! I’m so sad because some of that is your old life you listen to. He was a fixture in our lives. Whatever he did, he was just art himself. He didn’’t find it, he created art and people followed him. He transcended! So did GLENN FREY, so did LEMMY!

AH– And I think in our lives, it’s not really to grieve at this moment. It’s more to celebrate what they have done. Because what they have left will live on forever! You’re inspired every day by DAVID BOWIE, GLENN FREY or LEMMY. They were constantly challenging themselves and great record after great record they left behind just a treasure for eternity. It’s sad to say goodbye but they’ll always live forever in our hearts!

RAN– I put the fire on Facebook saying that BOWIE was more important than THE BEATLES! Even if I grew up with THE FAB FOUR, I have been discovering more and more about his music and artwork. So, I have no fear saying that!

RAN – Last but not least. Here you have the most difficult question! How is it possible for four guys to live on the road and to go on stage with such a beautiful female drummer?

BL– It’s such an hard question and I have no idea how answer to that question!

RAN– What a lucky man you are!!!(laughs)

RAN– Thank you, guys! Have a good concert tonight and great European dates on this tour!

Get What You Give

Take It As It Comes

Gone With The Wind