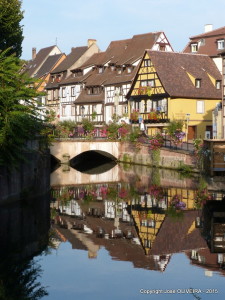 Capital of the Alsatian wines, Colmar is a city of art, history, and an exceptional architectural heritage. It is also the birthplace of sculptor Auguste Bartholdi, creator of the famous Statue of Liberty.

Colmar has many main events through the year but the Foire Aux Vins (Wine & Music Fair Festival) takes place every year for ten days in August.

This 68th edition runs between the 7th and 16th of this hot summer month of August.

This question scares off Robert Plant from journalists, as well as the question “When is Led Zeppelin going to have a reunion?” I swear, I would never ask that question. I would prefer to know his opinion on the epic LZ record re-issues undertaken with Jimmy Page. But there should be another reason for Robert Plant to avoid journalists. The fact of placing the professional photographers 100 meters away from the traditional pit reveals many other concerns of an aesthetic order. Why do aging idols fear showing their wrinkles? It has become an obsession with a lot of them!

The shadow of Zeppelin glided as in each of its last comings in Colmar (2001 and 2006). With a revised version of “Black Dog”, the door was open to a magical night!

Plant appeared in Colmar with the Sensational Space Shifters, also turning over the page of time like his old pal Jimmy Page, and he intended to let it show. On stage, some themes, as the famous “Dazed and Confused” received a real face-lift with the use of African instruments. And it pleases.

Finally, time does not seem to have affected Plant musically, recognizing straightaway his traditional touch with the opening of “I Can’t Quit You Baby”. Its memorable riff in the middle of the title–a small bluesy break—recalls the seventies. Plant has not lost any of his vocal capacity on the old titles as well as the new numbers.

Plant has a curious relationship with his own young musicians. In the seventies he controlled the big LZ Machine with Page, down to the smallest detail, as the reigning masters of control. Page and Plant were connoisseurs of the blues and with these young guys and his relationship with the blues is still very present. His notion of what might catch the ear is infallible. The combination of the African spirituality and the atmosphere of Led Zeppelin’s universe have proven to be an exciting and productive match.

But the piece for which every present 8,000 souls waited firmly appeared at the end of his magnificent performance. As a hymn of the last millennium, “Whole Lotta Love”, really set on fire the open-air theater of Colmar.

Asaf Avidan was the support act at this magic night and the finish date of his European Tour to promote his last work “ Gold Shadow”. Arriving from Budapest in the morning and after five concerts in seven days, without wrinkles problems, he came to the Press desk to talk with us! He considers Plant as a robust guard of the Rock’s Pantheon! (interview later)