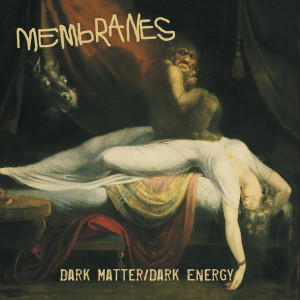 “Dark Matter/Dark Energy is a concept album,” says MEMBRANES vocalist/bassist John Robb about their new album – their first since 1989. “But it’s not just about the universe, although that is entwined in the songs – it’s the story of everything. It’s also about sex and death.” Rather heady words from a band most punks and music historians regard as one of the originators of the post-punk genre. Their new album Dark Matter/Dark Energy will be released in the US via Metropolis Records on July 10, 2015.

Gauzily drenched in reverb and intricate musicality, the new album is rife with experimental textures and rhythms and was spawned from a widely-hailed concert they performed in Manchester, England in 2013. Called the “The Universe: Explained featuring Membranes“, acclaimed-Higgs Boson scientists, physicists and philosophers opened the event with their theories on the universe and dark matter prior to the band’s trademark explosive set. Song titles like “Do the Supernova”, “The Hum of the Universe“, “The Multiverse Suite” and the epic opening track “The Universe Explodes Into A Billion Photons of Pure White Light” indicates that the album will stimulate the brain and the body. “That opening track was directly inspired by the conversation with [particle physicist Joe Incandela],” explains Robb. “Initially. it was about the end of the universe. Joe said that they think the end sees the universe collapse and glow forever into an eternal glowing white light – a beautiful and terrifying image – also an image of a religious heaven in a sense… that infinite glowing hiccup fascinated both of us as neither of us are traditional believers.” During recording, Robb himself was hit with tragedy. “During the album, my father died, and the pain of that is entwined in the songs and the idea that we all return to the dust of the universe which I reference in the song ‘The Hum of the Universe’,” he explains reflectively. “There is a recording of him talking to me about the universe at the beginning of the track, which is unsettling for me to listen to, but necessary to be in the song. The song is in B minor which is the key of the universe and it tails out into death as life drifts away from the body just like it did watching my father die in hospital.”

Formed in Blackpool, England in 1977, the band was the first band ever signed to the legendary label Creation Records but due to a recording budget that famed label owner Alan McGee could not afford, the band released what would have been Creation’s debut first 7″ “Spike Milligan’s Tape Recorder” on Criminal Damage which posited them on ‘Single of the Week’ in all four of UK’s major music publications, kicking their career off to a storied career. Reuniting in 2009 at the request of My Bloody Valentine, the band reignited their creative spark and are gearing up for their first studio release since 1989’s To Slay The Rock Pig.

With the release of Dark Matter/Dark Energy, Membranes are energized to return to the forefont. “We are aiming to come to the USA in October/November for a four week tour,” he explains . “We’re just trying to put it together now. These days with the visa situation touring America is expensive but we are really looking forward to coming and there is already a lot of Facebook excitement about a potential tour!” In addition, the band is planning on doing a gig with a 30-piece choir in Estonia in September to be filmed for a BBC documentary.

“The Universe Explodes Into a Billion Photons of Pure White Light”