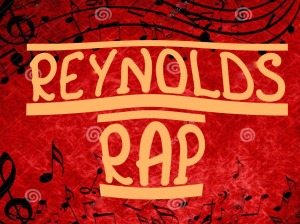 Entry in my Gratitude Journal: Thankful for the availability of excellent live music.   This is true not just in the Tampa Bay area but even in lil ol’ Dade City, Florida where one might not be surprised to find quality folk, old time or bluegrass, but also hear first-rate jazz.

From the fall to late spring, The Garden Cafe on 7th Avenue, Dade City features  the Valerie Gillespie Ensemble at its  Friday night Wine Downs for a  monthly Jazz Night.  In addition to jazz engagements throughout West Central Florida, Valerie Gillespie also performs with the Florida Orchestra.

I, an unabashed fan, recently had the opportunity to chat with this brilliant musician.

Since elementary school when the opportunity to join the band arose, she was immediately drawn to the saxophone and immersed herself with passion, earning  upper level band and first-chair positions. Recognizing that her exceptional talent might lead to boredom, her teacher suggested the clarinet as a further challenge.  Eventually she also studied flute and piccolo. 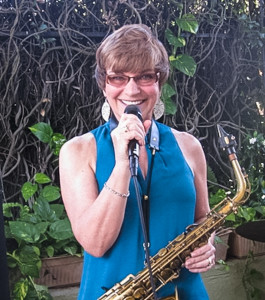 Gillespie has been playing professionally since the age of 14, beginning with lodges and state fairs.   Eventually she played with numerous bands ranging from The Ringling Circus to the Xavier Cougat Orchestra, touring the U. S. and Japan. Her website bio lists a few of the many distinguished artists with whom she’s  played, including Chick Corea and Rosemary Clooney.

She isn’t just a musician, she is music.  She admits to thinking of music almost constantly. “First thing in the morning there’s a song in my head,” and has a need to continually grow.  “A gig isn’t totally satisfying unless I’ve learned something.”

One of the most obvious questions is what it is like being a woman making it in a man’s domain.  Female jazz musicians tend to be vocalists, “girl singers,” as they were dubbed in the ‘30s and ‘40s, or pianists.

For Valerie Gillespie, being female hasn’t been an obstacle, perhaps because she simply would not allow it.  Thorough preparation, constant study, mastery of technique and her creative nature give her confidence to know that her cred will be established “as soon as they hear me and realize I don’t play in a tentative, timid way.”  Significantly, what initially drew her to the sax is that it is a “more assertive instrument.”

Her gender has not been a problem but more a source of  a few  amusing anecdotes.  “I’ll be carrying my saxophone case or rolling instrument cases       and someone will ask if I’m with the band.  When I say yes, they’d  ask if I was the singer.”

Thus, she resisted singing because it’s what “chicks” do.  Ironically it was at the release party of her first CD, Branded,  which is totally instrumental that someone requested “Bye Bye Blackbird, and on a whim she started to sing.  Even her husband was surprised because the only singing she did around the house was to their dogs in a playful baby voice.

Now vocalizing is an integral part of her sets, and her jazz singing is like her playing: strong and gutsy. 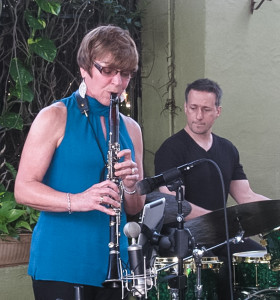 Her take-charge personality serves her well, as she  has to “coordinate, communicate and devise arrangements, often on the spot, even from the bandstand.”  The ensemble is very receptive to requests, so they might be asked to play something they rarely do. Seeing them extemporize an arrangement adds to the experience. Of course, this is the very nature of improv and what lures faithful followers of  VGE, as every set seems fresh.

Like many professional musicians, she has other work in addition to performing.  She teaches at University of South Florida, Florida Southern College and Hillsborough Community College.  And she is  a dedicated teacher.  “I get frustrated with some of my students who have so much talent but are content to play really well and not work to reach their true potential.”  Her deep spirituality manifests itself here as she regards such slacking off as God’s gift squandered.

Given Gillespie’s constant growth and development, I asked if there was a singular  I Have Arrived moment .  Among many milestones, a treasured memory was made when she was playing with the Florida Orchestra and Bobby McFerrin was guest conductor. It was a classical program, “but being Bobby McFerrin he turns to the bass player and says ‘Give me something in F.’ He starts a walking bass.  Then Bobby begins scatting “Blue Monk”  and then  asks, ‘Anyone want a solo?’ He looked around and pointed to me and said ‘You!’  I was the only saxophone player.  With no advanced knowledge, no preparation, I stood up and improvised.  It was me and Bobby McFerrin.”  Priceless, to be sure! 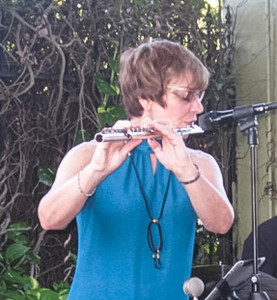 So, we in Dade City, Florida  are doubly fortunate to have Valerie Gillespie  to bring her ensemble  not only to play local establishments but also to be part of the community and play at events such as  Church Street Christmas.  Big talent can be found in small towns.

Check her website for VGE tour dates and venues, including The Villages, smack dab in the middle of Florida. Any fan of jazz standards will appreciate seeing Gillespie perform and be happy to have her CDs in their collection.  Walk on the wild side and listen to her It Can’t Be Christmas in June! Perhaps get a jump on your holiday shopping and get several copies as gifts for family and friends with good taste in music.

I could go on and on, but time is better spent listening to Valerie Gillespie and hear why, as Johnny Mercer would say, she’s “just too marvelous for words.”