I have had the pleasure of attending numerous concerts and workshops held by Marc Revenson aka “Li’l Rev” who is probably known not only as a ukulele master but also a harmonica enthusiast and music historian. Li’l Rev may also be the busiest musician in the ukulele workshop/convention circuit.  If he is not traveling to festivals (and this summer he is a headliner on an Alaskan ukulele cruise) around the country, he is writing Hal-Leonard music books, recording CDs, and/or performing ukulele and harmonica concerts. His pace is almost dizzying. I sat down briefly between workshops to interview him at the Tampa Bay Ukulele Getaway 2014 held in Clearwater, Florida.

Li’l Rev discussed the evolution of his interest in old-time music; how the ukulele serendipitously emerged into his life; his view of old-timey music and the resurgence of interest in acoustic instrumentation; and America’s new wave of interest in harmonicas.

The interview, including some awesome ukulele playing, can be heard in its entirety here:    LISTEN BELOW

I probably dwell these days in a place somewhere between 1865 and 1930s. That’s where I live the most.  Those years are the most fascinating to me.

Rock At Night: The music you compose is in the style of that era?

Rock At Night: Do you have a collection of 78 records?

Rock At Night: Where do you find all of these records?

Rev:  I’m not hunting like I used to since everything is all digitized.  That part of the discovery, I wouldn’t trade for nothing.  When I started collecting records…the journey was, you’d go to all these cool little record stores and you’d meet interesting, eclectic people. You’d be looking for specific things sometimes or you would discover others by looking through dusty records bins. It was kind of like a journey. You were on a pilgrimage to find this music.  Now, it’s all too easy. It’s fast food. You just go online , you want the Memphis Jug Band, Boom! It’s online at Amazon.

Rock At Night:  Were you always into old-time music? What kind of music did you listen to when you were younger?

Rev: I listened to classic rock of my generation like Black Sabbath, AC/DC, Rolling Stones, Beatles, Pink Floyd, you name it….Romantics, The Clash…all that kind of stuff.

I always like the music typical of the generation but was always drawn to music which had a rootsy flavor to it.  Like when I listen to Led Zeppelin, I heard the blues. Then, I used to read a lot of rock n’ roll biographies.  I discovered who their heroes were and that interested me in them. So, if I listened to Rolling Stones, I eventually would be led to Howlin’ Wolf and Muddy Waters. Then, if I listened to Muddy Waters, I would be led to Robert Johnson. It was just an endless spiral back in time to trace the roots of the music tree in American popular music. 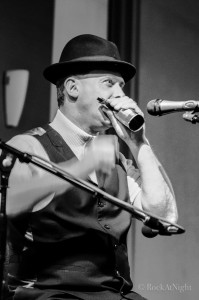 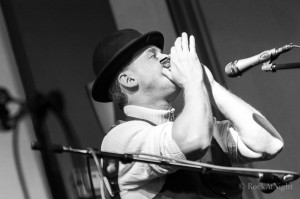 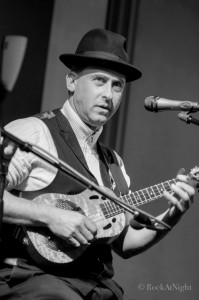 I got into the ukulele in the early-1990s. It’s becoming a blur right now. Someone gave me a ukulele at one of my concerts A fan brought in a ukulele that needed repair and basically gave it to me. At that point nobody was playing ukulele.

Rock At Night: Now that we have the resurgence of the ukulele, most of the books we use were written by you. How did that evolve?

Rock At Night: The Hal-Leonard books. Your name is on all of them.

Rev: The journey was serendipitous. It [was] a little bit of luck or as we say matzel.  I  look back at it now and sometimes I feel it was maybe preordained. I feel  so grateful, and lucky and blessed and so many other things to be part of all this stuff now.

Like somebody giving me a ukulele. There’s sometimes a mystery in that. Why was I given a ukulele so long ago?  When I look back now it all makes sense. Somebody gave me a ukulele and there was some magic in that.

How was it that I happened to be living in Milwaukee which is the home of one of the largest music publishers in the world?  How was it that I was able to read and write music when they were looking for someone to write music for ukulele books at a time before it even became popular?

Looking back at it now it was very magical to me….how it all unfolded. And I’m grateful. 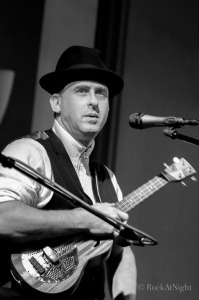 Rock At Night: You just recorded a CD of harmonica music. Do you think the harmonica is going to start becoming popular?

It’s a portable and affordable instrument. You can play almost anything on it. A lot of people are drawn to it. I think there’s a huge potential  for the harmonica.

Li’l Rev on the resurgence of acoustic music below:

When I was a grade school music teacher between 2000 and 2005, all of those kids are grown up now. They show up at my concerts and they are all playing mandolins, fiddles, and banjos now. It’s a sign that it’s come of age, that old-timey stuff .

I have a new harmonica CD out that I am promoting. I have a new book from Hal-Leonard coming out  at Christmas called “Fiddle Tunes for Ukulele.”  I’m excited about that because I’ve been telling everybody [about it] for the past three years now!

2015 is a banner year. I’m at most every uke fest throughout the country. For whatever reason, it will be a year that is hard to beat. 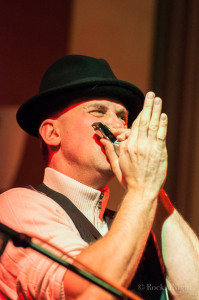