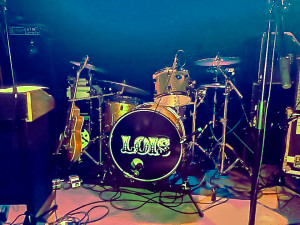 Rock At Night is on a mission to introduce great music to people and Lois is no exception. We recently reviewed Lois’ debut CD “The Polperro Horse Bus Company” and would like you to get acquainted with them.  Here is an excerpt of Rock At Night’s interview with John Selby, lead vocalist/composer in Lois:

When was the band formed?

How did everybody meet? What’s the story?

I (John) grew up with Rich and shared the same love of music then I met Lee at music college and set up our first band. Then when we all formed LOIS we were struggling to find a good drummer and by chance we met Ade when he stood in to do the sound for us and loved the band so we asked him to join us. We then went about finding our sound and making our music.

What is the significance of the name “Lois”? Is there a story behind it?

What kind of music did you listen to growing up? Who are your major influences?

I listened to The Doors, The Beatles, The Small Faces, Elvis and lots of different 60s or 70s.

Did you set out to be musicians or did it happen serendipitously?

It was the only goal for all of us from about the age of 15.

Where you trained as musicians?

We’ve not had any formal training however Lee and myself did go to music college.

What was the first song written?

The first song I wrote still hasn’t been recorded, in fact I’ve still not written that one down yet it’s still in my head.

What is the song writing process? How do the songs come about?

Generally one of us will bring the basic song lyrics melody and chords into a rehearsal and then we shape it up as a band.

Do you use vintage equipment to get your sound? Any favorite guitar effects?

We try to only use vintage gear with a few modern bits to help. The only guitar effects used are vintage fuzz by way of an arbiter fuzz face or a big muff, tremolo and reverb from the vintage fender amp and Vox wah.

What was the last CD you bought?

What is the funniest incident that happened to you  (the band)?

We travelled to a London show with a friend of ours who got drunk and slumped in the corner at the venue. The promoter inquired as to who he was so ade replied “he’s our accountant”

Have you toured outside of the UK?  Any plans to come to the States?

We are planning to tour the UK this year but would love to play in the States.

Obviously, your music has a retro 60s sound similar to the Kinks or Small Faces. Actually, listening to songs in your EP Velvet Morning  (“Shining Light” and “Sid James”) I found myself imagining George Harrison or the Beatles during their “Sergeant Pepper” era. It’s psychedelic.  Even your song “Velvet Morning” has a bossa nova beat and a driving Hammond organ riff. Is your sound intentional or subliminal?   How would you describe your music and what is the inspiration behind it?

We basically make the sort of music which we would love to hear which is generally 60s influenced with vintage guitars, Wurlitzer organ and Hammond preferably recorded in a vintage way and as live as possible.

It seems the “60s sound” gets revamped or reinvented every 20 years or so. In the 1980s, The Knack and the B52s brought back the nostalgic feel.  How did you get interested in music that is essentially 50 years old?  In the age of electro-techno, hip hop, and auto-tune, what kind of reception have you had? What kind of fan base is drawn to your music?

We have a good loyal fan base who come to the gigs and people seem to see our band as a breath of fresh air. I think there are a few current bands worth listening to but I generally find what’s on the radio boring and un inspiring that’s why I think people like us because we are a proper rock and roll band that won’t date in sound.

The song “Be True to Yourself” is really a different style from your other music. Can you tell me about it?

I wrote that song while at Glastonbury as I wanted a real festival sing along song.

You had the opportunity to meet the late Ian “Mac” McLagan of the Small Faces and Faces.  I actually feel sad talking about this since I was a fan too.  What was that like and did Mac say anything memorable to you?

He was a really, really nice genuine bloke. He signed his album for us, had a photo taken with us and told us about how he prefers Wurlitzer to Rhodes. He also told lots of stories about his old mates Ronnie Lane and Steve Marriott and some funny stories from his childhood as well as playing some old Small Faces and Faces tunes and some of his new stuff. It was an unforgettable experience for all of us as The Small Faces and Faces are a huge influence on the Lois sound and it was a great honour to meet one of our musical heroes.

We are currently planning gigs and festivals in the UK this year plus a tour and starting to record our second album. We of course would love to play in the states too.

Thank you so much!