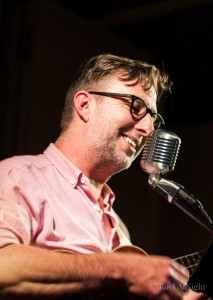 The first time I met Bermudian Mike Hind aka “Uncle Elvis” was when he performed as an emcee for the Tampa Bay Ukulele Society’s convention in Clearwater, Florida, in November 2013.  He was hysterically funny and delightfully wicked with his adult humor and skillful use of double entendres. The whole place was in an uproar! By the time he left the convention he was “everybody’s best friend” (sorry, inside joke).

I purchased his five-song EP “This Is Why We Can’t Have Nice Things” since he performed a few songs at the concert. I was really smitten with the catchy pop tunes and his powerful baritone delivery. Think Eddie Vedder or Scott Stapp (Creed) but with a ukulele back-up. The EP offers both original and cover songs and were masterfully engineered by the Cymru Bafta award-nominated engineer/producer, Felix Tod. I have to say Hind’s original tune “Instant Coffee” is sweetly romantic and upbeat, but I fell in love with his rendition of Martin Sexton’s “Happy” so much I typically hit “repeat” a couple of times when I listen to the EP.

During an interview with Hind, he was actually dumbfounded when I suggested he sounded like Eddie Vedder and answered, “People usually say I sound like David Bowie.” Bowie…Joe Schmowie….whatever. It’s all good stuff.

It seems 2014 was a banner year for Mike Hind as a ukulele artist, since it appears his career has skyrocketed!  He appeared at the Moku Ukulele Booth at NAMM, toured with the Flea Bitten Dawgs, and performed, this time, as one of the headliners at the Tampa Bay Ukulele Society’s 2014 Getaway.  I sat down at the convention to chat with funny-man Hind, but actually saw a more serious and poignant side to this relative newcomer in the convention circuit.

Since Hind’s name is sometimes billed as his given name and also “Uncle Elvis” he explained the confusion saying, “When I was a kid, Uncle Elvis was a guy in a comic book who wrote letters to the editor.  I always thought it was a cool name. When I was writing on a political website [in Bermuda] I thought I would take a pen name. And my finally crafted disguise lasted for about eight seconds before a friend of mine went ‘Oh! I liked that post a lot!’ They knew exactly who I was.”

Hind used the “Uncle Elvis” moniker while participating and posting on Ukulele Underground’s website, but noted, “It was just the name I used at the time. It was never meant to mean anything.” He is now going by his given name since he is actively promoting “himself” and not incognito behind an avatar online.

The downturn of the economy in the last decade appeared to be a worldwide phenomenon and the influence on Bermuda was no exception. Hind relays a defining moment in his life saying, “For a year, we basically couldn’t afford for me to work at the gallery. So I decided to…because there were no jobs out there and I have no discernible skills… to go and try to be a professional (or at least an unprofessional) musician.”

Hind explained he had stints as a stand-up comic and has sung in rock and punk rock bands since his 20s. He says, shaking his head, “It was all tenor [back then] and everyone wanted a tenor. I am a baritone.”  He continues explaining his transition, “I got into the theater stuff. I did the ‘Full Monty’ and I was very lucky that I got the lead in it. The part was for tenor but [I still worked my way through it]. Then I was in the ‘Best Little Whorehouse in Texas.’ ”

Hind’s face lights up when he remembers, “Oh! I was in ‘Jesus Christ Superstar.’” I got to play Peter. I had been wanting to do that show since I was about seven years old. My mom had bought me the record. The brown fuzzy record. And I used to listen to it on headphones over and over again. When we were in rehearsals, I put my music down. I was singing along and the musical director asked if I knew all the words.”

Hind explained his musical theater gigs were amateur productions and he did it “for fun.”  He continues, “So I got back into singing and occasionally sang with a rock band when they needed me.”

Hind explains how the ukulele came into his life and how it was instrumental (no pun intended) in the reinvention of Hind’s career:

So, the ukulele changed Hind’s life in approximately 2010. Once he discovered this little instrument, he set out to become proficient in learning and memorizing “approximately 20 or 30 cover songs.” He noted that even though he started out covering songs, he tries to “make them mine.”  He found a venue and began trying out his songs. He continues, “Yeah, I was doing open mike and the guy who ran the open-mike had to go away, so they asked me if I wanted to run the session. So, about three people showed up and it was a lot of fun but I had to play three hours a night. Then, I played at a little bar down the road. I almost had a nervous breakdown [because] I was so nervous but I got through it and was fine.” Then I said

“I’m just going to do this forever.”

Hind says about his newfound profession, “Last year I wrote some songs and put an EP out. I haven’t done it this year because I’ve been working six nights a week. I play at The Dock at the Waterlot at the Fairmont Southhampton. It’s a beautiful, beautiful area near a very fine dining establishment. It is literally where the shuttle from two different hotels unload the tourists. It literally is a dock!”

I was very interested in knowing more about Hind’s EP, which he explained, came to fruition through the efforts of IndieGoGo and the generosity of family and friends (“I had amazing, amazing support from amazing people”). Because I was impressed with the quality of the EP, especially for a debut,  Hind explains, “It was produced by Felix Tod who, I believe, is a Cymru Bafta award-nominated producer. He does Heather Nova’s (who is a Bermudian pop star in Europe) work. He is a remarkable producer!  He did things to my voice and to my playing that I did not think were humanly possible. He did a phenomenal job with the engineering.”

I finally confessed to Hind that I put his cover of “Happy” on “repeat” and had dragged my husband over to listen to it.

He exclaims, “That’s so lovely!”

No, I’m serious! I really love that song! I love your version of the song. 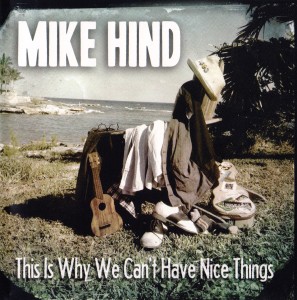 Being in the ukulele cult myself, I wondered how Hind broke into the traveling ukulele convention circuit.  He explains, “It’s due to the Tampa Bay Ukulele Society. This is my first year teaching workshops. I was lucky enough to go on tour with the Flea Bitten Dawgs for two years in a row. …with Thom, David, and Lee. They are some of the best people I know! Last year, 2013, we did a tour of the Midwest.”

I was lucky enough to see Hind and the Flea Bitten Dawgs at Gram’s Place Youth Hostel (“That was one of the nicest nights”) in Tampa last February. They played at other engagements in the area during their swing through the southern U.S., including Georgia and Florida. Hind says about the first tour, “It was very nice. It was lovely. [Although] I froze my butt off!   So, I said, ‘Guys, I can’t take the cold’ so this year we’re doing the Flea Bitten Dawgs Go South Tour.”

So, I asked, “What’s in store for the future?” and Hind answers, “I’m working on a CD of 70s covers.”  He tried out his version of Gordon Lightfoot’s “If You Can Read My Mind” during the Tampa convention. If this is any indication of the upcoming CD, people are in for a real treat!

So keep your eye out for Mike Hind’s new release.