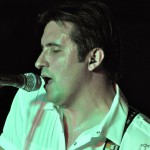 Ask Al Pinedo about the latest evolution of the band he founded, Hey Zuzie, and he will tell you we are going to be one of the few alternative bands that are truly bilingual.   Actually, yes, I cannot think of any names offhand, so this statement is likely true. During a telephone interview, Pinedo spoke about the latest iteration of the band he founded in Tampa Bay in 2012, by way of Caracas, Venezuela as well as his development as a songwriter and recent collaboration with new lead guitarist, George de Pinedo (no, they are not related). Hey Zuzie, which is a play on a nickname Al had as a child, consists of Craig Miskey (bass guitar/vocals), George de Pinedo (lead guitar/vocals), and Paul Carrion (drums). The Fab Four—Al, Craig, George, and Paul—as Pinedo laughingly described the band, is currently active in songwriting and music production, gearing up for upcoming gigs.

Music is in Pinedo’s bloodline. He explained, about being influenced by his father, who was a flamenco musician in Argentina and Venezuela. His father, who studied theater arts, would sing with Pinedo and his sister during  his childhood years.  Pinedo actually harbors a classical music background, having studied violin at the prestigious Emil Friedman Conservatory in Caracas, Venezuela.  He was enrolled at the conservatory between the age of 5 years and his mid-teens, when he decided to “take a break from music.”

Pinedo’s parents divorced and he relocated to the states to live with his mother in New Jersey. Knowing only basic English at the time, he enrolled in high school and later became obsessed with listening to the alternative and grunge bands of the 90’s, such as Pearl Jam, Green Day, and Alice in Chains. He believes this is where his music’s alternative flare and style originated.
It was actually during a trip home that Pinedo’s interest in playing music was reignited.  His father gave him a guitar and he began playing and singing along. After graduation from the University of Wisconsin, Pinedo returned to Caracas to live, and began voice lessons.  Pinedo noted, “As I began singing, my voice improved. I thought, I could do this for real!” He eventually joined an alternative and funk rock band called Ocean Gravity.  Ocean Gravity produced original music and Pinedo thought he would try his hand as a lyricist, later producing about 10 songs for the band.  He noted, “At first I was afraid to do it and then it came easy. I didn’t care if it sucked or not. It was trial and error.” After the band amicably split, Pinedo took his lyrics and wrote original music to accompany them.

Because Pinedo knew he was going to be permanently relocating back to the states, he gathered his friends to produce and record his first CD “Hey Zuzie-Inner Self.” He adds, “I knew I was moving to the States and wrote the songs in English.  I wanted a project that I could bring here.” I have heard it and I have to say, the production and engineering are exceptional!  The songs definitely have an “Alice in Chains” sound. You can hear for yourself at Reverbnation.

Pinedo relocated to Tampa Bay to be closer to family in the summer of 2012 and began the quest of creating a band to carry on with “Hey Zuzie” and essentially do “covers” of his songs.  As he reiterated, “Bringing to life a project that began with one person and friends was quite a challenge. It is difficult translating a solo project that I started into a band project.”  He explained the actual recorded production used three guitars so the reproduction had to be translated to essentially one or two guitars. Pinedo was burdened with the task of locating talent in Tampa Bay who were not only interested in reproducing “the sound” but were also technically savvy enough to pull it off. Initially he found Craig Miskey, who has experience in not only rock and blues but fusion jazz, to play the bass guitar. Miskey also plays with other local bands such as Hot Tub Club when not playing with Hey Zuzie and continues his study of jazz at the School of Musicology in Clearwater, Florida.  Initially, Greg Owens and Bill Cochran were part of the band, played a few gigs, but later parted ways to explore other musical avenues. Pinedo explains the challenge of forming and keeping a band on the same page boils down to priorities and expectations of a band.

So, I asked Pinedo to describe the current band and how they came together to form—or reform—Hey Zuzie with an expanded direction and new Latin-tinged sound.  Hey Zuzie added Paul Carrion on drums. Pinedo said there was an immediate connection the first time the two kindred spirits played together. Carrion is a seasoned musician who made his first studio recording at the age of 18 with a well-recognized band called Trama from his native Peru. He has traveled internationally with renowned artists and acts until he settled down to learn theory at The Drummers Collective School of Music in New York City. It was there he focused on becoming a studio musician.

Just this summer, Hey Zuzie added George de Pinedo to the band.  Pinedo laughed, explaining the two connected back in 2012 but de Pinedo was already involved in another band at the time. Pinedo explained, “I was checking out Reverbnation and typed in my last name ‘Pinedo’.  That’s when I saw George de Pinedo’s name.”  The two began emailing each other and kept in touch on Facebook until a stroke of luck and timing, brought the two together as not only band partners but songwriting collaborators.

George actually has an interesting and unique background according to Pinedo. “He came to the states maybe eight years ago but studied English in Cuba.” He continues, “I have a theory that everybody who plays music can pick up languages easier.” According to Pinedo, de Pinedo’s heart is in classic rock.  He was born and raised near Guantanamo, Cuba and used to pick up the radio waves from the military base. He basically grew up listening to American rock.

Pinedo explained the two have really bonded with the songwriting process. “George is actually bringing in the music and I’m writing [the lyrics] for him. We are actually blending our songwriting. He’s got songs that he has written. Sometimes I write lyrics, sometimes I write the singing.”  I asked if the styles differed but Pinedo chuckled, “Not as much as you would think.”  Now he is writing Spanish lyrics for de Pinedo’s songs and explained “it is still rock” but just in Spanish.Both songwriters work on pre-producing songs in their home studios. They devise the bass, guitar, and drum lines on the computer and then record raw working demos. The goal first is to complete a second batch of songs which can become a second CD. ‘

Pinedo sent a copy of a song to a friend recently and gave an account of what transpired. “I sent a few tracks to a musician friend and he liked most of the new music we were writing. I sent him one that was a pretty rough reproduction of the song. He started saying something about the accent. I don’t want to be rude but….”  This comment actually stunned me because I grew up hearing accents at home. My father and grandparents, who are Maltese, all spoke with a pseudo-Italian, clipped British accent.

Pinedo said with conviction in his voice, “We are going to cherish both of our backgrounds. People talk about inclusion and about how people have to adapt. Why should it be different in music? If I want to adapt in a new environment why would I close doors [on my heritage] when I can open them.” Hell! I can hardly understand some of the so-called English-speaking, mumbled lyrics today. Even in films, I have to put the DVDs in sub-title mode for some British films.

Lastly, Pinedo asked, “Why should I label something? It’s an expression of character. It’s who you are. We aren’t trying to be something we are not.” I agree. Why should he or any other non-native musicians put on a phony American accent to please others? What is an American accent anyway? We have our own regional dialects across the country.

“If you are looking for mainstream…I’m not sure it’s us?”