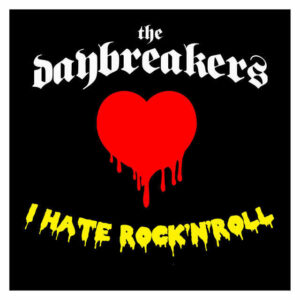 Praise for last single ‘Black Beatles On The Radio’

Classic Rock – Tracks of the Week

The fast-walking, hard-hitting riffing of the immense I Hate Rock ‘n’ Roll belies the song’s title. The lyrics rail  against the clichéd rock ‘n’ roll lifestyle of some bands I’ve toured with. People who have read Johnny  Thunders’ autobiography and taken it a bit too literally.”

”We’ve lost a few friends due to substance abuse and we feel it’s something that is pushed upon young bands  or perhaps some are in love with the self-destructive images of artists like Janis Joplin or Johnny Thunders.”

”The Daybreakers are composed of rollicking blues and smooth vocals. Combining the slickest parts of  experimental rock with lyrics pertaining to contemporary musical cliches and white-washing history, this trio’s  musical plight is symptomatic of the modern condition. From the paintings of Basquiat, to the forgotten  musical lineage of Sister Rosetta Tharpe’’

Formed in early 2019 the group have been tearing it up in packed venues in the UK and Europe both in their  own right and as the most supernova stars own Starship club nights which has attracted such luminaries as Jeff  Beck and Jimmy Page.